Cllr Mike Cartwright was sworn in at a meeting of the full council on Wednesday, 17 May. He received the unanimous support of all councillors for his nomination to the non-political role, and will serve as Mayor for the next year.

He takes over from Cllr Mercy Umeh, who has served as Mayor for three years, and will now become his Deputy.

Speaking after the meeting, Cllr Cartwright said: "This is a tremendous honour, and one I shall relish.

"I hope to spend my year shining a light on, and supporting, all that is good in the borough; while promoting my two Mayoral charities – Hammersmith & Fulham Foodbank, and the Barons Court Project."

Cllr Cartwright, 70, is an elected representative for Hammersmith Broadway Ward, and since being elected a councillor in 1992, has dedicated his life to the service of the borough. He is a former Magistrate, and served on the Hammersmith Bench for 13 years. 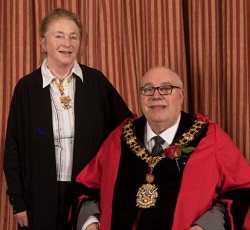 The role of Mayoress will be performed by Rosemary Pettit, pictured above, who is known to many in the borough through her involvement with the Hammersmith Society, as well as other voluntary service in Hammersmith & Fulham.

Cllr Cartwright has announced that he will not seek re-election to the council, and will retire in May 2018.

As well as a public role, promoting and being the face of the borough, the Mayor will chair meetings of the full council.

Hammersmith & Fulham Food Bank is part of a national network of food banks, supported by The Trussell Trust, which aims to prevent anyone in the borough going hungry. A registered charity, it offers three days’ nutritionally balanced emergency food and support to local people who are referred in crisis.

The Barons Court Project, also a registered charity, provides a day centre for people who are street homeless or living with mental health problems in Hammersmith and Fulham. Practical services include showers, laundry & cost price meals; as well as life skills training and one-to-one support sessions.

Outgoing Mayor, Cllr Umeh, said: "This has been an honour, a privilege and a wonderful experience."

One of his first engagements will be unveiling a new statue of 'England's greatest landscape gardener' Capability Brown on Hammersmith's riverside on 24 May. You can read more about this here.